When you don’t have control of your legs, it’s fairly obvious that you need a wheelchair to get out and about. However, with also not having controlled arm movement, and having space constraints, choices become more challenging. Since technically advanced wheelchairs cost more than some vehicles, it’s a major decision to consider.

When I got my first power chair, I was four-years-old and still had a lot of growing to do. The common chair control for injuries like mine is sip and puff, a straw that you blow, or suck, into at different strengths in order to get different

responses. I don’t remember testing this system, but it was decided that chin control would work best for me. This works by mounting a joystick by the user’s chin and it is then moved in the direction the person wants to go. With my first chair, I didn’t have much of a chin, so I stuck the joystick in my mouth. I did this until late high school when I finally started using my chin. In the over three decades I have used this system, I have become very familiar with it and prefer this to any other options. I also have buttons in my head rest that allow me to move the controls away or to my chin as needed.

For someone just looking at getting a wheelchair, and has similar function to me, my first recommendation is what works best for you. From my time of being around other wheelchair uses, I have seen several different control methods. Chin control seems to provide a smoother ride, especially on corners, as it doesn’t require constant or frequent puffs to turn. In my opinion, it may be slightly safer as if the user lets go of the stick, the chair stops. Sip and puff does allow the driver to move forward without constant pushing on the straw, so may be easier for some. I advise trying as many solutions as possible and going with what works best.

My very first chair was a Fortress Command, the company went out of business years ago. Considering what technology was available in the mid 1980’s, it did fairly well. Unfortunately, the micro-switches in the chin control required regular maintenance to keep working. This was when my father became very skilled at doing wheelchair maintenance, both in some electronics and the hardware. Unfortunately, this chair started getting a bad habit of taking off by itself and ignoring any input from me. The first occurrence happened in first grade and ended up with three classmates pushed into a wall in front of me.

In 1996, I got my second power wheelchair, an Action Arrow, also from a now defunct company. This chair was my first with a seat that could tilt and recline and allowed me to vary my speed by moving the joystick further in any direction. The controls also moved the on/off switch directly beside my chin so I could turn it off if needed. Compared to my previous chair, this one was much friendlier in maintenance and behavior problems. Being able to change position during the day was also very helpful as my body grew and I started having trouble with skin breakdown. Watch this video to see what the world looks like to me in this chair.

Around late 2004, I began working on my next power wheelchair. One of my requirements is having a very compact system 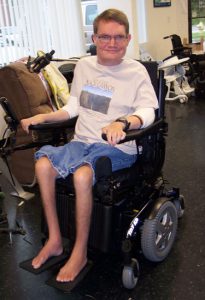 due to some of the buildings I regularly go to. If the chair is even an inch longer than the Action Arrow, it means not being able to get in some places.

I looked at every available option in my area, Invacare, Permobil, The Standing Company, and even one outside my area from Tucson, AZ. A chair was delivered, but after five years’ of work and frustration it unfortunately did not work.

During this time, I switched from using the traditional ventilator to the DPS, which greatly eased space requirements. In September of 2015, I got a new chair by Invacare, the TDX SP. It is my first chair without a place for a ventilator and has worked pretty well. After 19 years of using a one chair, it took time to get used to the new system. They do have differences, but I have enjoyed it.

If you are considering a power chair and want to know more about each one I looked at, please feel free to contact me. Learning from others is sometimes the best way to start, but it is ultimately whatever works best for each person’s needs.